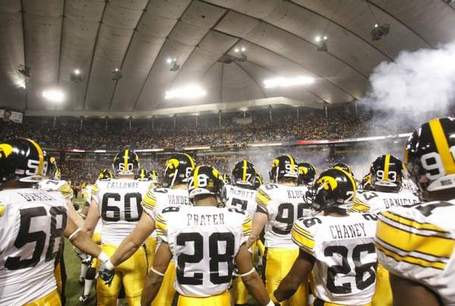 Sure, Iowa just downed the Gophers, 55-0. Which was awesome. But how much do we really know? What was really important about beating Minnesota? What does it all mean, Basil? The Takeaway has the answer.

It's not who hits first, it's who hits hardest. You know how in boxing matches, once one guy's down for the count or is otherwise so thoroughly beaten into a pulp that he can't defend himself, they call the match? What if boxing matches were mandated to go four rounds, no matter what, and it just ended up with one guy punching the other in his listless face over and over for the last half of the match? 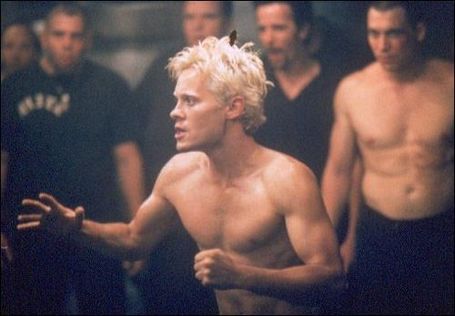 (Note: it took an incredible amount of editorial restraint to not put the post-fight picture here instead. You know what happens next anyway.)

Well, that would be a close approximation of what transpired at the Metrodome. Minnesota was fierce in their opposition in the first fifteen minutes; the score was 3-0 Iowa at the first break, and the game looked tight. The next field goal kept it at a one-possession game, and pants were still securely fashioned on Hawkeye fans everywhere.

Oh, but this is DJK's world, and Shonn Greene is the sun it spins around. The two token black guys on Iowa's offense went berserk in the second frame, including accounting for all three plays (16 yard rush, 48 yard catch, 9 yard rush TD) on Iowa's first TD drive of the game. Meanwhile, Iowa's defense had effectively beaten Minnesota's offense into submission; Minnesota's only two first downs of the entire half came on their first, fruitless drive. By the time Adam Weber threw the sweet touchdown to Amari Spievey, who just so happens to not play for Minnesota at all, the game was effectively over, and all that remained was two quarters of Iowa standing over Minnesota and punching them in the face over and over. The final tally, of course, was 55-0, the worst beating in modern series history.

Minnesota's leading rusher was someone named Mike Maciejowski with 13 yards on two carries. 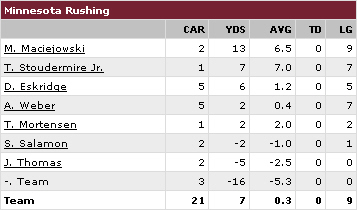 I have nothing to add to this.

If Shonn Greene isn't invited to New York, the Heisman ought to be discontinued. Look, we know Greene's not going to win the Heisman, no matter how many polls we screw with on ESPN. The Heisman's going to some QB in the Big XII South, and for good reason; all three of those guys have put together the best seasons of the year, without question. 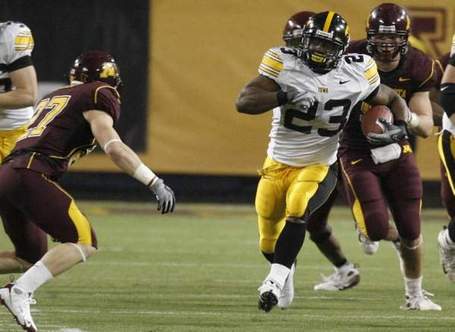 The safety ended up diving on the ground in front of Greene, who trucked him anyway.

But at the same time, Greene put together a mammoth season, the best of anyone in the Big Ten, the best by any tailback in the nation, and the best by any tailback at Iowa ever.  If Heisman voters are still uninformed about Greene, blame the publicity ghetto that is the Big Ten Network, which does more damage to the Big Ten's national reputation than any East Coast bias on ESPN ever could. So blame the BTN. But do not punish Greene by leaving him at home when it comes time to hand out the best individual trophy in all of sports.

Oregon State needs to cut this shit out. Look, congratulations to the Beavers for defeating the Trojans and sparing us the usual tired LOLVAGSEX jokes that come when USC wins that game. Seriously, thank you for that. But please just go ahead and lose to Oregon so USC can go to the Rose Bowl like they're supposed to.

There are 10 BCS spots available. The title game will, barring any unreasonable insanity (cough), include Texas and Florida (sorry, but Alabama's not the best team in the nation, and we're about to find that out). Once the Big XII (Fiesta) and SEC (Sugar) replace their conference obligations in their bowls, there will be two at-large spots remaining. Utah, at #6, must take one. Texas Tech, being the third Big XII team in the list, is very unlikely to take the other (though it's not impossible if the conference has a team in the BCS Championship game). So then the last spot would be up for grabs between Boise State and Ohio State, and frankly, we don't see any scenario where a bowl would elect to bring in Boise's fan base over Ohio State's.

Oh, but then there's USC at #5, by far the highest-rated Pac-10 team, but second in the conference standings while Stupid Fucking Oregon State rolls through the rest of the utterly hapless bunch out west. If Oregon State finishes their season with a win against Oregon this weekend, they go to the Rose Bowl, and USC's #5 BCS rating guarantees them the other at-large spot in the BCS. We don't want that.

That would push Ohio State to the salivating Capital One Bowl, and all of a sudden it's between Iowa and Michigan State for the prestigious Outback berth. Iowa's a very attractive bowl team, to be sure, but Michigan State is the much more logical choice. Without a New Year's Day bowl, Iowa is probably relegated to the Champs Sports Bowl, where they would face, like, Virginia Tech or something. I'd prefer the #4 team in the SEC-- Ole Miss, maybe, or South Carolina or LSU. Time to put this "SEC Speed" shit to bed once and for all. 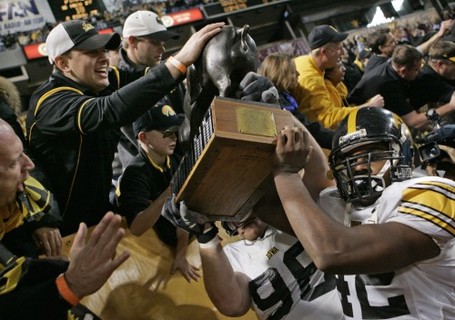 The pig is ours once again. Suck it, Gophers.