Unbeknownst to most readers, the real Iowa-Minnesota football game won't be at the Metrodome this weekend; it has already been played. After an agreement by Governors Chet Culver and Tim Pawlenty, the two states agreed to take part in an epic gridiron battle. Unlike its NCAA counterpart, this game pits the entire two states against each other; anyone who is even tangentially related to either state is eligible to play for it, whether they be current or former athletes, celebrities, politicians, or even fictional characters. It is THE HATE BOWL.

Ladies and gentlemen, this battle is about more than a bronze pig or even the sport of football. This is about Iowa vs. Minnesota.

15:00 - The second half starts with Iowa leading Minnesota 29-22.  The northerners make an unortodox move at the half, firing head coach Hayden Fox and his staff after discovering all exterior film footage of his offices is actually stock footage of the student health offices at The University of Iowa.  After hastily-held interviews, Minnesota athletic director Hubert Humphrey installs Joel and Ethan Coen as the new coaches.  The Coen Brothers promise to find Minnesota's strangest players, put them in situations they are wholly unqualified to handle - likely some sort of caper or kidnapping scheme - and watch the ensuing hijinks.  Their first move is replacing quarterback Tony Dungy with 1965 Bob Dylan.

14:55 - After Minnesota returns the kick to their own 30, 1965 Bob Dylan huddles his team for their first offensive play.  He calls a 36 Belly Option.  Unfortunately, nobody understands a damn word of it, least of all new halfback Nature Boy Ric Flair (WOOO!)  Dylan goes one way, Flair goes the other, and Iowa's linebackers come free through the new Coen-instituted all-female offensive line.  Dylan's attempted option pitch is picked up by Chad Greenway (who just lit up Judy Garland).  Iowa gets it, first and ten at the Gopher 23.

13:25 - The Iowa offense sputters to a halt against the Coens' new defense, which is made up exclusively of members of the 1991 Minnesota Twins.  As Coach Reagan huddles with his offensive coaches, Rhys Lloyd kicks the 40-yard field goal into the upper deck.  32-22 Iowa.

12:30 - On third and 6, offensive tackle Loni Anderson checks in as an eligible receiver.  The Coens, longtime students of Mike Leach's Airraid system, pull Anderson from left tackle to the right flat, where Dylan hits her between the numbers.  Anderson turns to find the Hanson Brothers lining up the screen in front of her.  The ensuing 30-yard gain is enough for the first down.  However, Anderson is knocked out of the game - and the state of Minnesota - by Bob Sanders.

11:25 - Bob Sanders is pummelled by Burt Reynolds, who suddenly emerged from the stands in an oversized yellow cowboy hat.  It is probably the end of the day for Sanders, and a fifteen-yard penalty on Minnesota.

9:15 - Ric Flair (WOOO!) takes a pitch left and finds plenty of running room near the Iowa sideline.  Ronald Reagan, proving to be the dirtiest player in the game, commands his players to erect a turnbuckle and set of three ropes on the sideline.  Flair instinctively flips over the turnbuckle and runs the other way, waiting for a clothesline that never comes.  Safety, Iowa.  34-22.

9:10 - When asked by the sideline reporter about his team's offensive struggles, 1965 Bob Dylan says "when all the clowns that you have commissioned have died in battle or in vain and you're sick of all this repetition, won't you come see me, Queen Jane?"  Twelve aging hipsters grin and nod at this off-handed diss of Joan Baez; everyone else doesn't have a fucking clue. 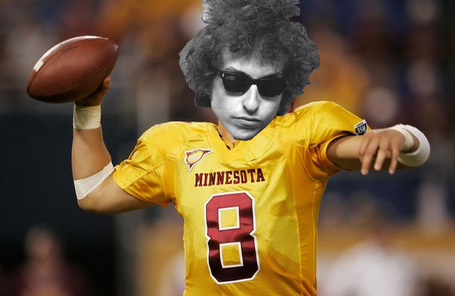 7:00 - Touchdown Minnesota.  On third and 14 from their own 42, Minnesota wingback Richard Dean Anderson - who you know as MacGyver - creates a diversion by detonating a bomb made of chewing gum, shoelaces, and a used syringe he got from that guy in The Replacements.  No, not Paul Westerberg.  The other guy.  While the Iowa defense ran for cover, Dylan hit Kevin Garnett for the long touchdown pass.  The two-point conversion fails, and Iowa retains a 34-28 lead.

5:40 - Iowa finally solves the Coens' 1991 Minnesota Twins defense.  Coach Ronald Reagan sends out an all-female lineup (what he calls the "Wild Dumplin'" formation), with quarterback Michelle Monaghan lined up at receiver.  While cornerback Jack Morris formulated a misogynistic comment and safety Kirby Puckett took off his pants, Monaghan split the zone coverage and caught a bomb from Donna Reed.  Nobody catches her.  Lloyd's extra point punctures the roof of the dome.  Iowa leads 41-28. 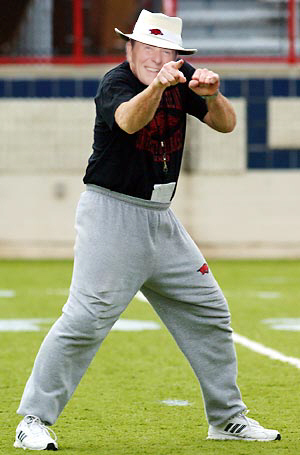 2:50 - After the teams trade three-and-outs, the Coen Brothers unleash their master plan.  While Ric Flair (WOOO!) wows the Iowa defense and MacGyver blows shit up with nothing more than common household objects, the Coens send John Goodman and Steve Buscemi to the Iowa sideline.  Goodman and Buscemi proceed to kidnap the McCaughey septuplets.  When asked where the kids are, the Coens insist they probably kidnapped themselves.  If you were wondering, the new NCAA clock rules specifically state the clock runs during kidnapping investigations.

1:15 - With most of the Iowa defense involved in a kidnapping investigation, Minnesota runs wild.  Ric Flair (WOO!) goes untouched to the end zone after B.J. Honerycutt puts a vicious block on fellow M*A*S*H* cast member Radar O'Reilly.  The two-point conversion is successful, despite Bob Dylan starting the play by taking off his helmet and yelling "YEE!"  Iowa starts the fourth quarter with a 41-36 lead.