Unbeknownst to most readers, the real Iowa-Minnesota football game won't be at the Metrodome this weekend; it has already been played. After an agreement by Governors Chet Culver and Tim Pawlenty, the two states agreed to take part in an epic gridiron battle. Unlike its NCAA counterpart, this game pits the entire two states against each other; anyone who is even tangentially related to either state is eligible to play for it, whether they be current or former athletes, celebrities, politicians, or even fictional characters. It is THE HATE BOWL.

Ladies and gentlemen, this battle is about more than a bronze pig or even the sport of football. This is about Iowa vs. Minnesota. 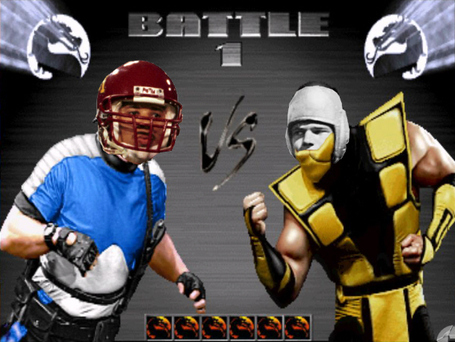 BHGP and The Daily Gopher will be splitting duties on this game, alternating quarters. If the game is tied at the end of regulation, the two blogs will flip a coin to determine possession of the narrative voice. The pregame and first quarter are here tonight.

15:00: Iowa has won the toss and elected to defer. Hahaha, just kidding they're receiving. Back to receive the kick are Tim Dwight and noted speedster Herbert Hoover. For the Gophers, Rhys Lloyd will kick off.

15:00: No time runs off the clock, as Lloyd's kick sails wildly left into a horrified crowd. Six fans die, and several more are injured. First and 10 for Iowa at the 40.

12:12: Iowa has driven into Minnesota territory after a crucial run by fullback Buffalo Bill Cody. His rifle blast into the chest of linebacker Kent Hrbek frightened many Gophers and their fans, but modern shoulder pads are essentially bulletproof, plus officials confiscated the firearm from the frontiersman while he was trying to reload it. First and 10 Iowa at the Minnesota 39. 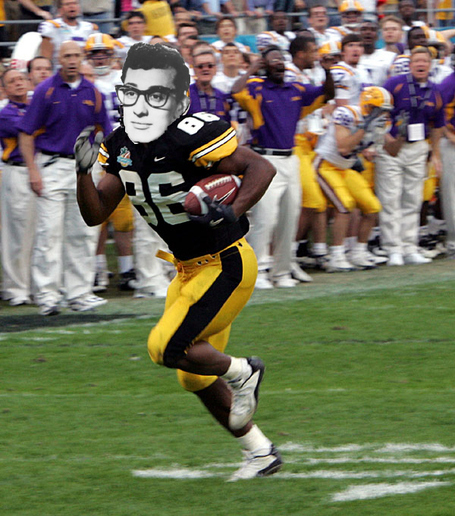 9:59: The Hawkeyes push into the red zone after a critical 3rd down reception by Buddy Holly. Holly successfully petitioned for Iowa eligibility, since over 51% of his body was incinerated inside state limits. QB Chuck Long is a perfect 4-4 on the drive.

8:36: Iowa kicker Rhys Lloyd booms the kick out of the end zone, putting the Gophers at their own 20 to start the drive.

8:20: Gopher QB Garrison Keillor goes back to pass, and he is sacked! Ann "The Man" Landers comes off the edge and drops the dulcet-toned down pillow for a loss of 10 yards! Hayden Fox seems to be reconsidering his decision to put Prince and The Revolution at offensive line.

7:35: After an ineffective drive, Rhys Lloyd goes back to punt the ball away for Minnesota.... and it's blocked! The Nadas broke through the line, and frontman Jason Walsmith swats the punt out of the end zone! Lloyd's seven-step punt technique seems to have betrayed the Gophers on this play. 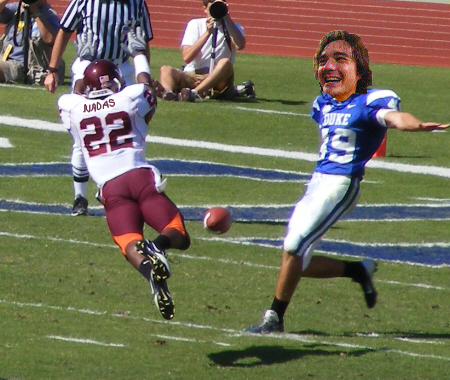 7:35: Minnesota averts disaster when special teams coach Jim Wacker notices Rhys Lloyd lining up for the free kick backwards, aiming for his own goal posts. Wacker calls timeout and replaces Lloyd with Walter Mondale, who amazingly boots the ball 85 yards! Herbert Hoover has no chance to return it, which is just as well, since he fumbles the ball in the end zone and it crumbles into dust.

6:19: Calamity strikes the Iowa offense, which had been rolling along again, after head coach Ronald Reagan inserts Shawn Johnson as a "change of pace" back. Johnson executes a perfect double-twisting Yurchenko vault over center Brody Boyd, but she doesn't bother taking the ball, and Minnesota's Bruce Smith recovers the ball.

6:19: I'm told Minnesota's Bruce Smith is not the same one as the Buffalo Bills' Hall of Famer. That one went to Virginia Tech.

4:22: A giant block by Minnesota Fats, manchild, and Laurence Maroney dashes inside the Iowa 5 yard line! The Iowa defense is in real trouble!

4:01: In an instance of art imitating real life, Bob Sanders strips Maroney at the goal line and recovers the ball. The score is still 9-0 Iowa.

1:46: Facing a 3rd and 14 deep in their own territory, Iowa resorts to their old friend, the bubble screen. Long hits his receiver in stride, but plenty of Minnesota defenders impede the path to the first down marker...

...but that receiver is Olympic hurdler Lolo Jones, and every single Gopher tries to tackle low with disastrous results! Jones sprints the last 72 yards untouched, and Iowa tries to extend their lead.

1:38: The extra point is blocked by Minnesota's Kevin Garnett, and Iowa's lead remains at 15-0.

1:38: Rhys Lloyd booms a kickoff through the uprights for Iowa.

0:11: QB Garrison Keillor finally attempts a pass to Randy Moss, but it's swatted away by ferocious CB C. Vivian Stringer.

0:00: The quarter ends with RB Adrian Peterson getting stuffed at the line by OLB Chad Greenway. Much ado was made over Greenway's allegiances, since he went to Iowa but is now a Minnesota Viking, but it appears the South Dakota native is sticking with the Hawkeyes!

15-0 Iowa is your score after one quarter, and we will let you know when the 2nd quarter is up at The Daily Gopher.