A near-capacity crowd of several hundred wild Hawkeye fans witnessed one of the all-time great beatdowns in college basketball history as Iowa ran away and hid from the hapless University of Texas Longhorns -San Antonio Roadrunners, 73-67.

Cyrus Tate led all scorers with 18 points, which might be the most anyone's ever scored ever.

Iowa maintains their pace for a perfect season at 2-0 and they must be considered the overwhelming favorites for BXI Champions and a #1 seed in the NCAA Tournament. If I were everyone else I wouldn't even try beating Iowa.

Here's a picture of one of Cyrus Tate's monster jams. 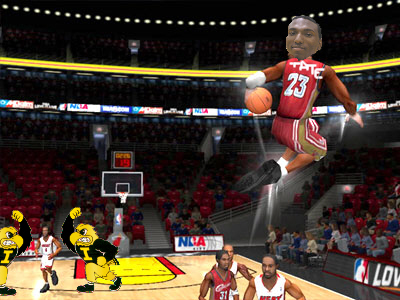