Share All sharing options for: WELCOME TO HATE WEEK 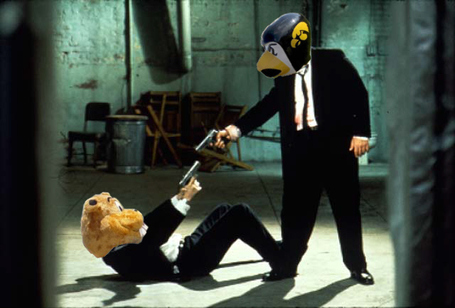 I hate their dimwitted coach, a man whose countenance in close games could best be described as "Tice-like," a man who is so completely overwhelmed and outmatched by his current situation that it borders on comical.  Tim Brewster knows how to talk in that motivational dialect that soundtracks late-night infomercials and Radisson get-rich-quick seminars.  He rode this Tony Robbins parody to an inexplicable head coaching job and million-dollar contract.  Minnesota might have chosen a professional wrestler as governor and might yet choose Stuart Smalley as a senator, but Lil' Zook's hiring is still the most dumbfounded thing Minnesota's ever done.

I hate their delusional fanbase, which willingly ignores reality and laps up their coach's moronic ramblings about a Gopher Nation that doesn't exist and Rose Bowls that will never come.  The fantasy reached fruition when Minnesota racked up wins over the likes of Montana State and Bowling Green and somehow extrapolated this into a case for a January bowl.  They are just now getting their comeuppance.  They lost the Little Brown Jug.  They lost Paul Bunyan's Axe.  They're about to lose Floyd of Rosedale again.  They play for 17 different trophies and currently hold none of them.  Understand this, Gopher fan: Gopher Nation doesn't even encompass the state of Minnesota.  Gopher Nation doesn't have the numbers or the intestinal fortitude to fill half the Metrodome on Saturdays.  Gopher Nation is weaker than the Ukraine.  Gopher Nation is feebile.  Gopher Nation will be rolled by my tanks, and brought to its knees by my infantry.

I hate the Metrodome, that decrepit monument to a decrepit program, air-conditioned and antiseptic.  It can be an intimidating place when the seats are full for a Vikings-Packers game.  It can also sit silently, like when all 35,000 inhabitants of Gopher Nation watch as Adam Weber throws another game-killing interception.  It's not entirely the fault of the fans, either; Minnesota is the only Big Ten team playing in an off-campus multi-purpose garbage heap, and the trip from St. Paul is a hike.  Of course, this means plenty of empty seats for me and 40,000 of my closest friends.  I'm coming to your city, Gophers, and I'm bringing hell with me.  Your new stadium may belong to TCF Bank, but your old one still belongs to us.

Make no mistake about it, Iowa fans: Minnesota hates you.  They're actually quite open about it.  They borrow their hate from the Canadians; they hate because they know they can't win, and there's nothing they can do about it but hate some more.  It's pitiful, really.  So go ahead and hate me, Gopher. It will only add to my pleasure when I tie Floyd of Rosedale to the top of my car for the drive home.  With your mom.

It is now our job, Iowa.  It is our job to put the final cold dagger into their fantasy, to expose Minnesota as the fraud they are, to send them to the Christmas Day bowl game they so richly deserve.  It is our job to steamroll them into a fine powder, then snort them up like a line of blow on Prince's coffee table.  It is our job to overwhelm them with our numbers and our noise and our outright obnoxiousness in their own house, to revel in their misery, to burn that shithole to the ground and piss on the ashes.