Sure, Iowa just downed the Boilermakers, 22-17. But how much do we really know? What was really important about beating Purdue? What does it all mean, Basil? The Takeaway has the answer.

Shonn is gonn. It's not confirmed, obviously, otherwise it'd be all over the papers. But after last week's 211-yard performance pushed Greene to within 106 yards of Iowa's single season record, it seems purely foolish to wonder whether the 23-year-old Greene will return to the Hawkeyes next year. Spake Hlas:

“One more year,” Iowa students chanted. But that’s only asked of the players who are surely gone.

In fact, his resume seems to have been punctuated perfectly by Greene's two touchdowns, which bring him to 15 on the year. On the first, one perfectly timed spin move away from Greene's bitch, Frank Duong, sprung the Heisman candidate for a 75-yard sprint down the sideline. Agility and speed.

The second score came in the fourth quarter, when Greene met Duong again. Duong filled the hole on a rush perfectly, but Greene put his shoulder very low and absolutely trucked the hapless, 178-pound former walk-on. Duong stayed on the ground, trying to figure out what day of the week it was, as Greene kept his balance and ran to the corner for a 14-year score. Brute strength.

Greene might need one more monster game against Minnesta to punch his ticket to the Downtown Athletic Club this December; while he now leads the nation in rushing yards (and has done it on fifty fewer carries than Javon Ringer), it's hard to imagine a scenario without Tim Tebow, Colt McCoy, Graham Harrell, and Sam Bradford all headed to New York to vie for the Heisman. Thus, Greene will need to separate himself from the rest of a pack that includes Ringer, Michael Crabtree, and Juice Williams. Bringing the school record in tow and over 1800 yards would be a nice first step.

Uhhh... guys? For the sixth time in ten games this season, Iowa has underperformed to the point of allowing a team in the game that had absolutely no business winning. This is a continuation of a disturbing pattern that has formed since 2005, and this week, it almost cost Iowa a game they should have won easily.

This lack of discipline (and that's almost certainly what it is) manifested itself on Saturday in two ways: the kicking game and ball control. Trent Mossbrucker's two consecutive missed PATs not only kept Purdue within single digits throughout the first half, but almost certainly kept Purdue in a game that should have easily been salted away at the end of the game. All other things being equal, if Mossbrucker even makes one of those PATs, Iowa leads 23-17 and has a relatively easy 37-yard field goal to make it a two possession game with a hair over a minute to go. 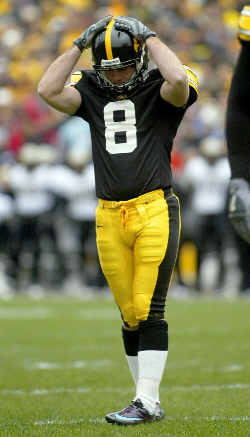 Meanwhile, the turnover margin was equal on Saturday, but it probably should not have been. Late in the first half, Amari Spievey dropped a sure pick-six that would have pushed the score to 19-3 (or, knowing what Mossbrucker was up to, 18-3); Purdue would score on the drive later to get within two points at the break instead. Tyler Sash also dropped an interception that hit him in the hands, but it was nowhere near as easy a play as Spievey's. Then there was Jeremiha Hunter's interception in the first quarter, deep in Purdue territory, that was negated by a ludicrous pass interference penalty. Basically, Purdue was very lucky that this game did not spiral out of control for them early on.

Meanwhile, on the offensive end, both Brodell and DJK coughed up fumbles on promising drives. Brodell's was the more egregious mistake, as he was fighting for yards in an absolutely impossible situation; there were three men on him and maybe one more yard at stake after the first down had already been gained.

The difference between this year and last is not discipline, but sheer talent; this is a game that Iowa would have lost last year, plain and simple. Nobody has truly outplayed or outmuscled Iowa yet this year, and there are only two games left in the season, but this team needs to get back to its 2002 form of not beating itself (the ISU game has been excised from my memory, so what I just said is accurate). 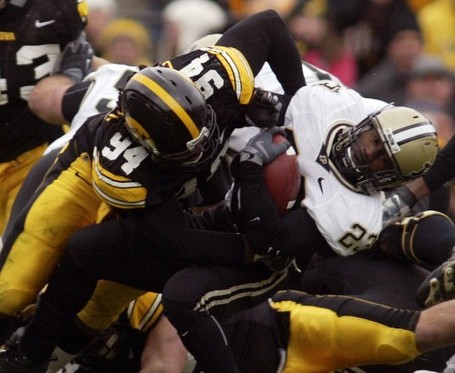 Nothing to do with this part of the article, but it's just been a while since we had a picture of Adrian Clayborn fucking some poor kid up.

Bring on Minnesota. The Goofers are in Classic Mason mode, racking up a nice record early against MACrifices and other cupcakes before folding like Ken O'Keefe at a poker tournament. Their latest setback came against the quasi-resurgent Badgers, going up 21-7 at the break before deciding that they really want nothing to do with a New Year's Bowl.

The Gophers' record is basically catching up to their talent at this point; they're 7-4 (3-4) and really unlikely to win another game, even in a bowl. Sure, going from 1-11 to 7-6 is still quite a feat, but it's a lot easier to go from shitty to mediocre than from mediocre to good.

So one more week of the regular season, and it's up at Kinnick North. We can't think of a better way to send off the Humpty Dump's college career than by waltzing up there with 30,000 Iowa fans, playing the Ike to Minnesota's Tina, then taking down their goalposts one last time? The Vikings aren't even playing up there the day afterwards. What do you say, Hawk fans. To whom do belong all their goalpost? 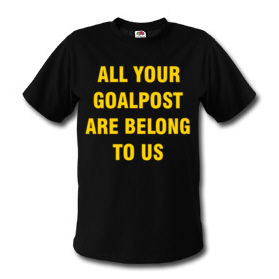