Absolutely one of the strangest games of the season.  Minnesota led this thing 21-7 at the half, after capitalizing on Wisconsin turnovers and ridiculous field position (the average starting line of scrimmage for Goldy's first three scoring drives was the Wisconsin 36).  Bielema did something at the half, and Wisconsin responded by scoring 17 on their first three series in the second half, then getting a full-fledged momentum shift by forcing a fumble/safety on the ensuing kickoff.  Brewster looked helpless, and he was; you don't mess with Big Mo.  Minnesota scored a late touchdown and 2-point conversion to pull within 3, but a hideous Adam Weber pass was intercepted to end it.

The second half was the first glimpse of how good Dustin Sherer might be.  Despite a horrible start, Sherer finished with 242 yards on 18/31 passing.  Wisconsin has exhibited nothing remotely resembling a passing offense until Saturday; if they found it, they're officially dangerous.

As for Minnesota, well, we're totally going to kill Minnesota. 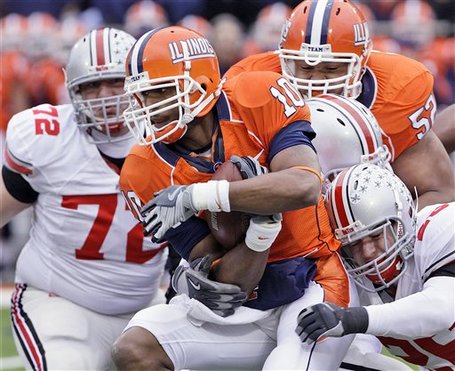 That's Eddie McGee.  He plays quarterback.  He replaced Juice Williams, who fumbled the ball away deep in his own territory and threw a pick.  Things are not good in Champaign.  Illinois is 5-6, and has to beat Northwestern next week for a trip to Detroit.

Ohio State, on the other hand, isn't even attempting to throw the ball anymore.  Wells, Pryor, and the supporting cast combined for 305 yards rushing, and Pryor needed just 49 yards on 10 passes to dismantle the Illini.  Both Beanie and Pryor went over 100 on the ground.  It was the first time Ohio State had two 100-yard rushers since the 2006 Iowa game.  Sorry for bringing it up. 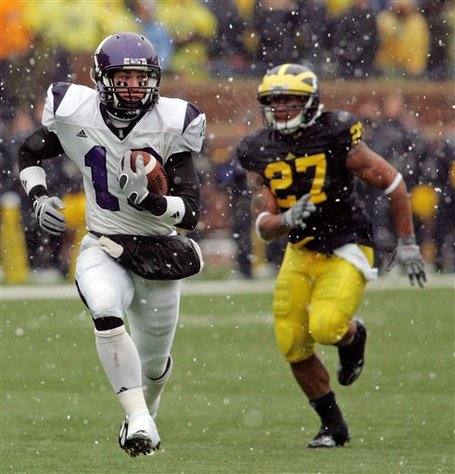 Michigan and Northwestern were practically even in everything; Michigan outgained the 'Cats by seven yards, both teams turned the ball over twice, third- and fourth-down conversions were practically identical (though Michigan did attempt a staggering 6 fourth-down conversions).  Nick Sheridan reverted to the mean (8/29, 61 yards passing; 35 yards rushing) in horrible conditions.  C.J. Bacher returned to the lineup and did his usual C.J. Bacher thing (17/29, 198, 2 TD, 2 INT).  The only difference was field position.  Northwestern converted their two short-field opportunities into 14 points, and Michigan's offense sputtered to a halt in the third quarter (12 total yards in their first 4 possessions of the second half).

My knowledge of Michigan is limited to the coverage I get from the nineteen great Michigan blogs in my RSS reader, but is there something to be said for personnel consistency?  When every week involves two different quarterbacks and four different running backs, can you really expect the offense to work effectively?  This season is a lost cause for the LOLverines, with a school-record number of losses and Ohio State on the horizon, but Rodriguez's constant tinkering can't be helping matters. 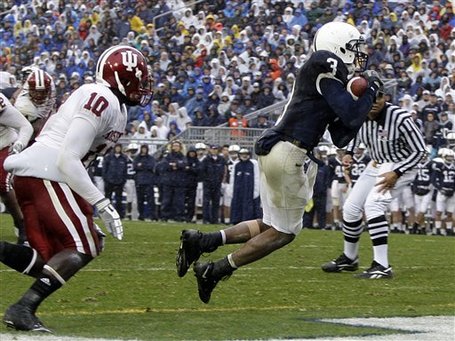 No alarms and no surprises.

Indiana was held to just 57 yards passing and 180 yards of total offense.  Penn State had more than that in rushing yards alone.  Clark played like he was still pissed about last week (20/36, 240 yards, 2 TD, 1 INT).  Despite a net -2 turnover margin, it was an out-and-out thumping.

(All photos courtesy of Associated Press)