There's a Game on Saturday? Purdon't

Share All sharing options for: There's a Game on Saturday? Purdon't 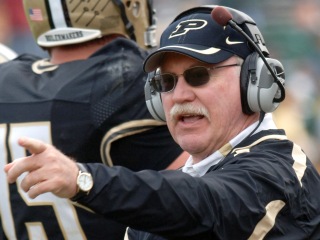 I am the Walrus

Iowa hosts Purdue (11:00 kickoff, Big Ten Network, called by Thom Brennaman, Chris Martin, and Anthony Herron) Saturday, in what will be Joe Tiller's last road game as a head coach.  The Boilers enter the game at 3-7 (1-5), but the record doesn't tell the entire story.  Every team that has beaten Purdue was, at one point, in the top 25 this year, and Oregon, Penn State, Ohio State, and Minnesota struggled to put them away.  They're struggling, but the Boilers are no cupcake.

Moeaki is Noeaki.  Again.  Andy Kuempel is also doubtful.  Everyone else is apparently good to go.  Chad Geary is listed ahead of Adrian Clayborn on the two-deep at defensive end.  It could be a nod to the former walk-on junior, who is finishing his fourth year and might not come back for his fifth.  Otherwise, the depth chart remains stable.

When Purdue Has the Ball

Ironically, Tiller's final season has been marked by offensive struggles.  In their seven losses, Purdue has averaged only 13.5 points per game.  That's bad for Iowa; it's horrendous for Purdue.

I have no idea who will play quarterback for Purdue.  Reports this week indicated Curtis Painter is nearly back to full health, but sophomore Justin Siller could start and will likely play significant minutes.  Siller is a former running back who was thrown into the position and proceeded to post 48 on Michigan.  There's no doubt he can run; it remains to be seen if he can pass.

Kory Sheets completes the backfield.  He's a senior, he has played significant minutes for four years, and he's having his best season yet.  He's also a wee bit frustrated:

"I'm kind of starting to get used to [not getting passes in the flat]," he said. "It seems like the defenses aren't even covering me because they don't think I'm going to get the ball anyway. It's been that way last week and the week before. So get used to it.

"A number of things are going through Painter's mind, and he's just kind of forgetting that I'm out there. I honestly couldn't tell you. You've got to ask him."

"You need somebody in there [at quarterback] who's going to be consistent," he said. "Right now, Painter hasn't been consistent and they're trying to find out if Joey can be consistent, but he got hurt.

"If they don't have consistency at quarterback, and I'm being real consistent, I think they have to start looking at me for some answers and giving me the ball and let me carry the team, instead of keep putting it in Painter's hands."

With Sheets and Siller in the game, Purdue mutates from the typical Joe Tiller pass-first spread to a run set.  Given their offensive line, neither one worries me.  Iowa should have no trouble putting pressure on the quarterback, whoever that is.

Shonn Greene will run for 6 yards a carry while Brock Spack humps a bagel.