A Letter From Bloodpunch Barta

Share All sharing options for: A Letter From Bloodpunch Barta

Recall, if you will, the bedlam on the Kinnick field after Daniel Murray hit the game-winning field goal last week. Then recall the bedlam after the final second ticked off. Fun times. But after statements like DJK saying people were trying to stick their hands in his facemask and JayPa's public complaint about fan behavior, Gary Barta has warned fans to behave after the Purdue game (like we'd rush the field for Purdue). 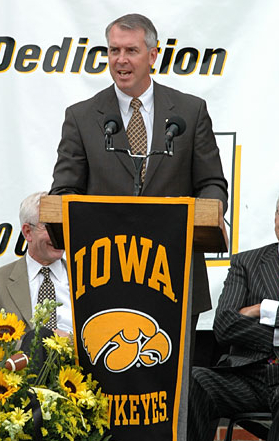 GMX THUG TILL I DIE BITCH WHAT

Fortunately for you, BHGP has also received the official statement from the dark side of the Bartamoon, Gary's alter ego, Bloodpunch Barta. Gary's letter to season ticket holders, plus Bloodpunch's addenda, follow after the break.

Last Saturday’s exciting victory over Penn State was a fantastic achievement by our football team. It was evidence of the rewards that come hand-in-hand with hard work and determination. I’m so proud of our student-athletes and coaches.

Almost proud enough to overlook the record and legal problems. Ha, ha, just kidding, I still won't release your parents until we go back to a New Year's Day bowl. Remember the Alamo my ass.

As always, our fans and the magic of Kinnick Stadium played a significant role in the victory. Thanks to every Hawkeye who joined us in Iowa City for this historic win.

Thanks also to every mark-ass Nittany Lion who got their asses blown up like a colonoscopy.

Unfortunately, the celebration that took place on the playing field after the game became uncontrollable and very dangerous. Sadly, some of our fans were injured. I also know there were several coaches and student-athletes from both teams as well as game officials who were deeply concerned for their safety.

This is unacceptable. The plan was to rip the PSU players asunder with our bare hands, not to yell profanities at them as you run by. The next time I hear someone complaining about their safety, I'm chopping heads off, because that means you left them alive.

As we look ahead to this week’s Senior Day game against Purdue and future games inside Kinnick, I ask that fans of the Hawkeyes temper their enthusiasm with a dose of common sense. I know the temptation of the moment can be great, but safety has to be our highest priority.

Of course, by "common sense" I mean "methamphetamines." But still, wear goggles, because the infidel uses pepper spray, and we will not be brought down by some goddamn angry aerosol. Safety first when the Revolution comes.

In addition to injuries, I’m aware there were several arrests made throughout the game including some on the field post game. It certainly is never our desire to have fans experience this level of consequence, but, again, creating a wonderful, family friendly, and safe college football experience is our goal.

This is the biggest area of disappointment. I don't ever want to see any of my minions arrested. It's so unbecoming of a Hawkeye fan.

That is why if an officer approaches you--ever--tell them Bloodpunch says hello and then kill them with a sword. My plan has come too far for the local authorities to stop me now!

Thank you for assisting us in this effort in the future.

Your death will be rather painless.

Literally fucking beat them to death!