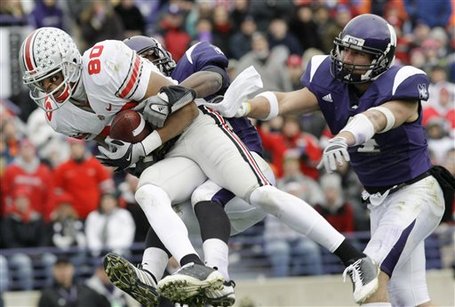 Northwestern is banged up.  Ohio State is Ohio State.  That's probably good for 28 points.  But that last touchdown?  That was unnecessary showboating, you jackasses.

Northwestern clearly set themselves to limiting the impact of Terrelle Pryor, and they largely succeeded (9/14 for 197 yards passing, 33 yards on 6 rushing attempts).  They weren't quite so lucky with Beanie Wells, however...

Just a word of advice: You guys might want to avoid arm tackling him.  Beanie ran for 140 yards and 2 scores as Ohio State racked up 244 total rushing yards.

In other news, Northwestern might be onto something with this Kafka character.  The junior quarterback-in-waiting threw for 177 yards and ran for another 83 against one of the better defenses in the conference.  It's just a shame he had no help.  Of course, he probably should have thought of that when he chose to attend Northwestern. 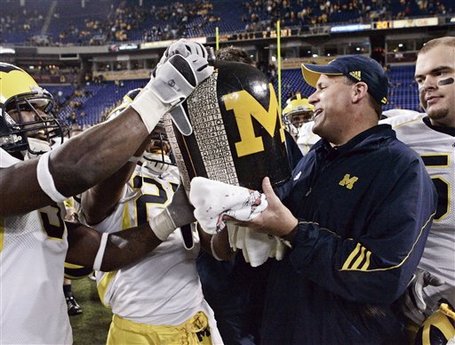 So I went over to The Daily Gopher a couple of weeks ago, reading what can only be called the delusional rantings of crazed freezing flannel-clad lunatics.  After reading about how Minnesota was a lock for a New Year's Day bowl, I couldn't help myself and left this comment:

Look, I don’t want to completely rain on your parade. Last year, you weren’t killing cupcakes; you were one. Congrats to Brewster & Co. for turning it around and getting bowl eligible. You took advantage of a favorable schedule that doesn’t include 2 of the conference’s top teams, as well you should. I’m just saying those of you (fortunately, not either one of the esteemed writers at TDG, but, for instance, WSR) who are yelling about lack of respect and ROSE BOWL BABY WOO are delusional on a level never before seen. Minnesota won’t beat Northwestern. They probably won’t beat Wisconsin at Madison. They’re 50/50 at best against Michigan (they’d have a far better chance if they played now, but the longer you wait to play a talented team in a new offensive system, the worse the chances become). And on November 22, Shonn Greene is going to turn that rickety sham of a defense into his own personal hand puppet. That’s 8-4 (4-4) at best, and when combined with that traditional Gopher fan base who would go to a bowl but gets the keys frozen in the ignition, that gets you to Phoenix.

(The best part of that?  Gopher fan - and occasional BHGP commenter - WhiteSpeedReceiver was adamant that Iowa's only remaining win was going to be against Purdue.  Enjoy Detroit, boys).

As for the actual game, well, Minnesota is a turnover-created fraud.  Michigan found the handle, and Minnesota collapsed into a heap of talentless brown air-conditioned bleh.  Michigan's lackluster offense outgained Minnesota 435-188.  The rushing yards were even more lopsided, which is fine given Minnesota's propensity to throw the rock.  Problem is, Adam Weber's 13/24 for 105 isn't nearly enough to get it done.  As for Nick SheriDEATH's performance for Big Blue, go read MGoBlog.  Cook writes better prose about his 3-7 team blowing out Minnesota than we do about our 6-4 team beating the #3 team in the country with a last-second field goal.

Indiana hung with Wisconsin for a half, but then the Badgers HOLY CRAP 441 YARDS RUSHING.  WIsconsin had three - THREE - players run for more than 100 yards.  David Gilreath, a wide receiver, had 168 yards on eight carries.  Wisconsin seems to be figuring it out: The easiest way to hide your inept quarterback is to keep the ball out of his hands.

Wisconsin is a two-touchdown favorite aganst Minnesota next week.  That might be a little low. 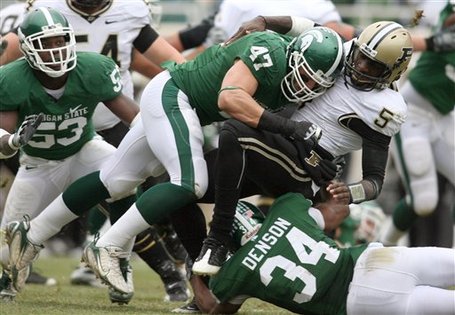 So much for the Justin Siller boomlet.  The Spartan defense held Purdue to just 191 yards of total offense.  As for the converted running back who killed Michigan last week, Siller was a horrific 13/30 for 83 yards passing, and added a meager 6 yards rushing on 13 attempts.  Michigan State's run-first, run-second, chuck-it-deep offense might not be particularly efficient, and their quarterbaack might be thoroughly mediocre, but when it's up against one of the worst offensive performances of Joe Tiller's tenure at Purdue, it's more than enough.

For all the "Greeene for Heisman" people, Javon Ringer racked up 122 yards and 2 touchdowns on 32 carries.  A good day, to be sure, but not nearly the day our guy had.

Look, it's nowhere near the embarassment as our loss to Western Michigan was last year; the Broncos are 8-2 and have an outside chance at the MAC championship this year.

With that said, Illinois simply didn't show up.  Western Michigan built a 20-7 halftime lead on the back of two Juicy interceptions, then held on through a second half full of missed Illinois field goals and failed fourth down conversions.  The Illinois running game was virtually nonexistent; Williams went for 68, while Benn and a trio of running backs added just 47 more yards.  When Illinois doesn't run, Illinois doesn't win.  And then Zook smashes things.

Someone remind me again how we lost to these guys.