There's A Game On Saturday? The Zookin' Is Cookin'

Share All sharing options for: There's A Game On Saturday? The Zookin' Is Cookin'

The glorious finale to The Zook Murders will be published Sunday, mainly because there's a plot point in it that makes the Illinois game utterly impossible. Let's take a look on the field.

On paper, Iowa should win.  Iowa has the more consistent, if not better, offense and a defense geared to stop exactly what Illinois wants to do.  However, games are not played on paper (except at California, where the field is made from freshly shredded old oak, just to piss off the hippies). 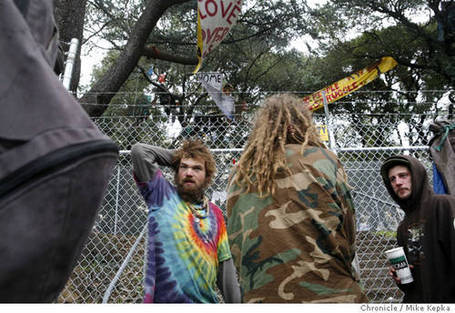 If Illinois stops Shonn Greene, it will be a complete aberration from their usual performance on defense. They had much less reason to fear the Wisconsin passing game, and Wisconsin ran all over Illinois, even after their best receiver (Beckum) was shelved.  The Illinois defense is clearly suffering after losing Captain America himself, as opponents are running for over 150 yards per game on them. Brit Miller is a tackling machine, but he's not getting much help from his defensive line, who would rather whiff on tackles than keep their blockers off the linebackers. As for Illinois' pass defense, it's just plain not good enough, as evidenced by the fact that Illinois never approached a come-from-behind victory against Mizzou, Minnesota, or Wisconsin, despite monster days from Juice Williams. Corner Vontae Davis is a legitimate talent, but he's also the guy getting owned by DJK in this...

...and he's their best defensive back.

That said, though, Illinois stopping the Iowa running game would hardly be the biggest strategic victory in college football history, especially since Iowa is - how do we say? - predictable. Of course, so is Freddy Krueger, and predictability didn't usually stop him.

Ricky Stanzi seems to be moving away from the drive-killing Stanziballs and Stanziscrambles that singlehandedly ended any chance of victory against MSU and NU. Are his obvious mistakes the difference between Iowa's last two losses and their last two wins? Tough to say, but if Iowa keeps coming away from those red zone trips with 3 or 7 points instead of 0, it's awfully hard to say that Sparty or Just Northwestern beats us.  In starts against Iowa State, Northwestern, and Michigan State, Stanzi was a net liability to this offense; against Indiana and Wisconsin, he was unquestionably an asset.

The other good news for the offense is that Tony Moeaki and Seth Olsen are practicing. Any production from Moeaki has long since been declared gravy, especially with Myers and Reisner comprising a formidable TE duo in their own right.  Nonetheless, when not limping off the field while holding a random body part, Moeaki runs like a receiver and blocks like a third tackle.  In this offense, where a tight end's receiving abilities are almost as important as his blocking skill, both assets are appreciated.  Olsen had better be 100%, because (as we covered before) Kuempel was great in his absence.  Wisconsin's rush defense might have given up after about 20 minutes of game time, but those huge rushes that made Wisconsin give up were all under Kuempel. The two factors aren't exactly coincidental, you know.

Again, we're strictly on paper and Iowa has a noticeable recent history of turtling in hostile environments, but there is a distinct talent advantage here while Iowa is on offense, especially along the front lines.  It's been enough to keep the turnover-prone incarnation of Iowa in contention in road games against Pitt and Michigan State.  It should be enough to get the more mistake-proof edition over the top.

When Illiinois Has the Ball

This is hard to call, to say the least. This is the most physically capable Iowa defense since at least 2004 and probably before then, and it has been unfazed by backs far greater than Jason Ford and Daniel Dufrene.

Illinois' offense is predicated on making you respect the run, and let's face it, Iowa's linebackers don't really have much incentive to sell out toward the LOS in respect of the run unless Illinois proves they can make Iowa do so. Kroul and Unusual Punishment are sufficiently talented and experienced enough to force Illinois' gameplan to the outside (or if Illinois refuses to adjust, K&UP guarantee Automatic Win).

At linebacker, Edds and Hunter have proven themselves sufficiently athletic enough to be effective between the hashes and sidelines on stretch runs, so it's very hard to imagine an offensive philosophy for Illinois that doesn't involve heavy amounts of deep attack passing.  The upshot?  Iowa's strength plays directly against Illinois' strength.  Further, Its weakness is not nearly as exploitable by the Illini.

That defensive weakness: Safety. Look, you know we're not Brett Greenwood fans. He's good at preventing big plays through the air, which necessitates his being one step slow to curls, corners, and ins/outs. He can be thrown at between the 10s, and he usually is.  Ty Sash, by way of comparison, brings some serious lumber. His high level of activity was paramount in Iowa's effort to shut down ISU's ground game in an environment that wouldn't allow a passing game. Now, of course he's not the cover guy Greenwood is, but SSs rarely are, and depending on them to be so is a recipe for disaster.

Here's what worries me: Juice Williams' far biggest numbers have come while the team is behind, when Zook completely abandons the run aspect that keeps teams close to the line of scrimmage. We may well find out what happens if they throw it all over the field straight from the opening kick, especially against a defense that:

A) Sold out against their run, often refusing to go dime when Illinois lined up 4-wide;

B) Has a long history of not changing tendencies;

C) Has never seen a pass-wacky Illinois offense, even as all the Illini talent this season lies in their air game (BONUS: co-starting RB Daniel Dufrene leaves the team on his own accord during practice this week);

D) Exists to break our hearts.

By the way, if you ever needed a perfect example of the cost of attrition, look no further than Pat Angerer. Had Angerer left after last season, few Hawk fans would have batted an eye or given it any thought in regards to the 2-deep, where Angerer barely spent any time--he was too busy being injured or mononucleosised. But instead of following his instincts and quitting, he stuck around and is now a high-level MLB. So while at the time it's hard to say losing, let's say, Marcus Wilson was disastrous, we'd certainly feel better about the safety position if Burnt Firewood (err, Brett Greenwood) had beaten him out for the starting spot.

Some good news for the Hawkeyes is on the edges, where Adrian Clayborn is expected back at end. While Broderick Binns and Chad Geary have been adequate in replacement, Binns' motor is questionable and Geary is not exactly a high-ceiling player. With big-time skill players like Illinois has, having an relentless, athletic end like Clayborn on the field makes everyone else's jobs a lot easier.

God, do not make me do this. Iowa should win by 10-14 points. Illinois is somewhere between inconsistent and mortally flawed. Juice can only throw when the Illini are behind, and even then the defense isn't good enough to hold the other team in check while Illinois scores enough to come back.

At the same time, one stop of Greene and one easily picked Stanziball throws Iowa into a world of hurt. Can you trust Stanzi not to give Illinois a chance to score off him? Can you trust Iowa to come back from a defensive touchdown? Would you be willing to place money on that trust? I'm not.

We'll say 23-16 Iowa from the safety of our nuclear shelter and with a 6-cent bet in at Vegas. Anything else would be reckless.