Share All sharing options for: The Zook Murders: Part 2 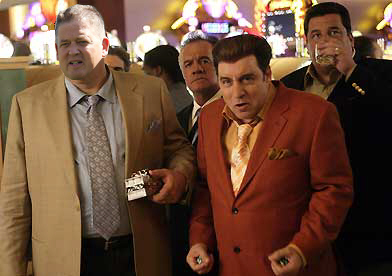 In the back room of a Gary, Indiana strip club, two men
and a man-turned-leg stand around a pool table...

...So I had Ron Powlus hanging upside down over the balcony, and all the change is falling out of his pockets...

...and a nickel falls 18 floors, right onto this guy's head.  Knocks him unconscious.  Powlus looks up and says, "I think you killed him"...

Spit it out, Davie, you magnificent bastard!

...I says to him, "He ain't dead.  If I wanted to kill that sonofabitch, I'd have to drop a six-foot-one 225 pound overhyped no-talent douchebag on his head.  You know where I can find one of those?"

HUR HUR HUR [falls off chair]  I swear to Christ, Davie, that story never gets old!

Clausen!  Did you take care of that thing?

Uh, Coach?  I checked the details of my scholarship, and you can't make me go collect your debts from

AAAAAARRRRRGGGGHHH!  Why did you shoot me in the knee?

I don't give a shit what the terms of your scholarship say.  You are going to take care of this for me.  You took an oath.  You understand, fuckhead?

Good.  Now get that bandaged up, and I don't want to see you again until it's finished.  I WANT MY MONEY.  Clausen...next time, I'm not aiming for your knee, you understand?

Duffy, you think that was too much?

Hey, you gotta do what you gotta do, you know?  In the season three finale of my hit ABC "TGIFamily" sitcom Step By Step, I came into some money and bought a $5000 recliner.  Carol was so mad, she made me sleep in it for a week.  Mo' money mo' problems, boss.

See?  That right there.  That's why you're my consigliere, Patrick Duffy Leg.

[Bob Davie takes another drink, then misses a shot on the 6-ball]

OK, now, what are we going to do about this situation down in Florida?

We've sent three different guys down there, and he still hasn't paid.  They all end up shotgunning Schlitz's and doing whipits.

I don't care if he's Mahatma Fucking Gandhi!  The man bet $500 a race on the greyhounds.  The man has to pay his debts.

We could send down Clausen...

Clausen is a piece of shit.  I don't care how much schematic advantage I give him, he always comes up short.  No, we've gone far enough.  It's time for final payment.

You sure, Charlie?  You don't want to do something you'll regret.  On Step By Step season 7, episode 13, we left the baby with the teenagers.  They let her go outside without supervision. Even though we eventually found her and the teens learned a lesson about responsibility, I regretted that decision for three more episodes.

I understand your point, Patrick Duffy Leg, but it's about time this paint-huffing, Beast-swilling idiot pays the ultimate price.

Who do you want to send?  Davie?

Shit no.  He's in no shape for it.  Christ, Davie hasn't been the same since Brad Banks graduated from Iowa.  I swear that bastard loved Brad Banks more than his own gouda...

Well, you know what I meant.  ESPN had him broadcast every game Banks played, and ol' Bob just fell head over heels.  Jesus, just look at him.

[Weis turns so Patrick Duffy Leg can get a look at Davie, curled up in a ball on the floor and making out with his pool cue]

Every time we send one of your players down there, they come back with a meth addiction and a child support payment.

It's time to bring out the big guns.

On a soundstage in Bristol, Connecticut

I DITH NOT MEAN TO CALL RITH ROTHRIGUETH A NATHI.  I APOLOGITHE FOR

THORRY ABOUT THAT.  LETH TAKE IT FROM THE TOP.  I DITH NOT MEAN TO CALL

OK, I'D BETTER TAKE THITH.  IT COULD BE MY WIFE, AND MAN CANNOT LITH WITHOUT LOVE

YETH, HELLO THARLIE!  I HOPE YOU THAW I PUT YOUR IRITH AT NUMBER THEVEN THITH WEEK...

I HAVE TO THLY TO THLORIDA.  IMMEDIATELY.