There's a Game on Saturday? No, No There's Not

Share All sharing options for: There's a Game on Saturday? No, No There's Not

Iowa is idle this weekend, but that doesn't mean this weekend isn't important.  Every Big Ten game has implications on Iowa's season and bowl future.  So, in the place of the usual preview, a quick look at the Big Ten week 9 lineup.

Why watch?  It's a preview of next week.  Offensively, Illinois is an open book.  When they run effectively, they stand a decent chance of winning.  When they're forced to rely on the pass, they tend to lose.  They are net +2 in turnover margin in wins, net -4 in losses.  On defense, they have been poor against the run, giving up 151 yards per game on the ground.  More indicative, however, is that they have allowed 76 more rushing yards per game in their three losses than in their four wins.  Iowa's defense should hold up against Illinois' running game next week; they did last season, and they have throughout this season against better backs.  We'll know much more about how effective Iowa's offense might be against the Illini once Wisconsin takes their shot.

Who ya want?  Definitely Wisconsin.  Illinois is one of Iowa's primary foes in bowl positioning, and 0-4 Wisconsin is no threat whatsoever.

Why watch?  Good question. Charissa Thompson is on the sideline, so if you're into frumpy chicks, this might be your game.

Why pass?  We've already played both teams, Indiana is beyond horrible, and Northwestern is Just Northwestern.  Turn on Illinois-Wisconsin.  Turn on Texas Tech-Kansas.  Hell, turn on Giada at Home on the Food Network at 12:00. 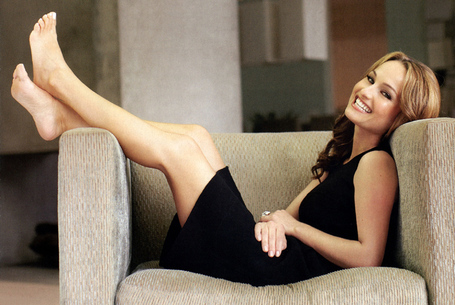 Is there any doubt what I'll be watching?

Who ya got?  Northwestern -8, O/U 52.  I'm going nowhere near that line, though the over is certainly tempting.

Who ya want?  Indiana, for the same reasons as Wisconsin.  Because nobody gives a shit about Northwestern football, all Iowa needs is to match NU's record to pass them.  Every Northwestern loss improves Iowa's bowl positioning.

Why watch?  Minnesota is an enigma.  They played a Glen Mason-worthy string of cupcakes in the non-conference schedule (if you want more on the Gopher's schedule to date, you can take a look at my comment on TDG this week.  It got slightly out of hand).  They lost to Ohio State at the 'Shoe in a game that wasn't nearly as close as the final score indicated (OSU led 34-6 before surrendering two garbage-time touchdowns and allowing Minnesota to cover the spread).  They squeaked by Indiana at home, then beat Illinois - despite being outgained by more than 230 yards - in one of the stranger games of the season.  If it weren't for that win, nobody would be giving the Gophers any consideration whatsoever.  And I hate Minnesota.

Why pass?  Because they're playing Purdue, who has now notified the press that they've quit caring.  In other words, absent a Gopher loss, we aren't going to learn anything about Minnesota from this game.

Why watch?  Schadenfreude Game of the Week, that's why.  If Michigan continues to play like they have against Purdue Penn State, Illinois, and Tol...Tole...BWAHAHAHAHAHAAAA!!!...you get to laugh and laugh.  If Michigan again spanks Little Brother, the riots in East Lansing will be even funnier.  Either way, a delusional fanbase goes down in embarrassing fashion.  It's a no-lose situation!

Why pass?  Georgia-LSU is on CBS.  Uncle Verne makes it even better.

Who ya got?  Michigan State -4, O/U 47.  This line has moved a point and a half to Michigan's side over the past week.  It never should have.  MSU covers.

Who ya want?  Michigan.  Again, the team that poses no threat over the team that is ahead (by the way, after last year's turnout, Iowa might get the nod over Michigan State by bowl reps if given the opportunity).

Why watch?  You mean, aside from the fact that it's the biggest in-conference game of the season?  Or the fact that it's the one chance for PSU to (a) hold a coming-out party and vault into the top 2, or (b) lose?  Or the fact that the best quarterback in the conference this season (Daryll Clark) is up against the best quarterback in the conference two years from now (Terrelle Pryor)?  Or the off chance that Joe Paterno will recognize his surroundings, channel his inner Woody Hayes, and crack James Laurinaitis' skull with a well-placed cane shot?  That enough for ya?

Why pass?  If it seems like Ohio State has 13 players on the field, it's only because Musberger and Herbstreit are in the booth.  That's enough to hit the mute button.  It's not nearly enough to turn the channel.

Who ya got?  PSU -2, O/U 44.5.  I can't bring myself to ignore Ohio State as a home dog, but the better play is the over.  OSU hasn't seen anything quite like the Spread HD yet, and the same could be said for Penn State and Terrelle Pryor's wishbone-esque refusal to throw the ball.

Who ya want?  PSU, but close.  If Penn State can win here and finish undefeated, they're virtually assured of a BCS championship spot (barring Alabama or someone out of the BXII running the table).  Someone - almost certainly Ohio State - will go to the Rose Bowl, even if there's someone more qualified.  Two BCS bids for the conference means more spots available for the rest of us.  Most importantly, it could mean...