There's a Game on Saturday? The No-Hardy Pants Party

Share All sharing options for: There's a Game on Saturday? The No-Hardy Pants Party 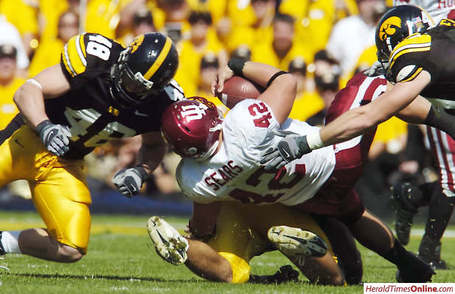 You want to know how bad last year's game went?
This play ended in an Indiana touchdown.
That is not a joke.

The Indiana game has been a yackety sax-inducing comedy of errors for Iowa for the past two years.  In 2006, Iowa entered the IU game off a 47-17 win over Purdue; the stunning loss that day was the final stake to the heart of the myth of Iowa as an up-and-coming elite program.  Iowa fell out of the top 25 after that loss, and hasn't seen the poll since.  Last year, every bouce went Indiana's way (how often does your quarterback complete a pass to the fullback in the flat, recover the fullback's fumble, and take it 71 yards for a touchdown?) and, despite one of Christensen's best days as a starting quarterback, Iowa never recovered.  Of course, those two games included prominent displays of ineptitude by Adam Shada while "covering" James Motherfuckin' Hardy. 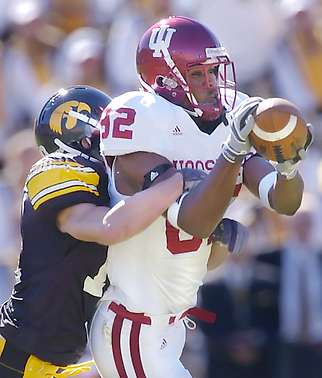 When Indiana Has the Ball

This year, there's no more Shada.  There's no more Hardy.  However, there still is Kirk Ferentz, who is 3-4 against Indiana in his nine seasons at Iowa (Indiana rotated off Iowa's schedule in 2003-04). There is an interesting correlation between Ferentz's success against Indiana and the mobility of the Hoosier quarterback:

Ferentz is 1-4 against Indiana when the Hoosier signal-caller can run the ball, and 2-0 when he prefers to stand in the pocket and wait.  For anyone who has watched Iowa football over the last decade, it shouldn't be that surprising.

The bad news?  Kellen Lewis is back.  The good news?  He's not necessarily the quarterback.  Lewis has started every game behind center, but went only 11/25 in an embarassing loss to in-state stepchild Ball State (for the record, he ran for 150 yards in that game).  The next week, he split snaps with sophomore Ben Chappell - and was used at wide receiver - in a home loss to Michigan State.  Last week, he took the vast majority of the reps against Minnesota, but ran the ball only nine times for 18 yards.

Last year, it wasn't just Lewis and Hardy who tore apart Iowa's defense.  Fullback Josiah Sears caught pass after pass in the flats with space to move.  By the end of the day, he racked up seven catches for 58 yards (and the aforementioned fumble).  The numbers weren't important; the catches came in critical down-and-distance situations and extended drives that should have been dead.  Sears graduated, but Indiana has used receiver/back Ray Fisher as this year's outlet receiver, and starting halfback Marcus Thigpen is an accomplished pass-catcher from the backfield.  Anyone who watched this year's Iowa-Northwestern game knows the Hawks are still susceptible to the swing pass.  Expect Indiana to attack the flats all afternoon.

Fortunately, there has been no replacement for James Hardy.  IU's top receiver, Andrew Means, has caught just three passes for 30 yards in two Big Ten games.  Freshman Demarlo Belcher (which is Spanish for "of marlo belcher") has been their best receiver lately, but that's not saying much.  The passing game - especially the deep passing game that has massacred Iowa the past two years - isn't much of a concern.  Recent history indicates that if Lewis plays quarterback and runs effectively, either in designed run plays or while scrambling, Indiana has a good chance of racking up a bunch of points on Iowa.  If he doesn't play, or is content to sit in the pocket, Indiana has virtually no chance of winning this game.

As for the Iowa offense, Indiana has been horrendous against good running backs.  Ball State halfback MiQuale Lewis ran for 166 yards.  Ringer followed that up with 198.  Expect a healthy dose of the run from Iowa, especially from Shonn Greene (who even Michigan State fans are conceding might be the best back in the Big Ten).  Indiana's pass defense has forced a bunch of incompletions, but has also given up huge chunks of yardage on deep plays.  Given Iowa's speed on the outside, I think we have to throw d ... throw dee ... thrHAHAHAHAHAHAAAAAA!  Of course we won't throw deep!  That's the LOLZ!

I haven't watched enough of Indiana to know just how susceptible the Hoosiers might be to the three-yard out route.  Clearly, their ability to defend the super-double-secret Iowa passing game will decide who wins.

The more I look at this, the better I feel.  This is not a good Indiana team.  They were never close in a home loss to Ball State.  They were never close in a home loss to Michigan State.  They were shut down by Minnesota.  It's clear Bill Lynch is trying to move this offense closer to the pass-happy Purdue spread than the hybrid qb run/deep pass spread of the past two years.  Throw in the Hawkeye defense's success when facing a similar offense against Iowa State (and the Clones offense might actually be better than this one), and this might be the one time we can keep Indiana under 30 points.

This is as close to a must-win as we get, though.  A loss here effectively ends any hope of a bowl appearance and - let's face it - any hope of a quick turnaround.  A win, and the "six plays from 6-0" meme lives to see another day.

In 2001, a young but relatively experienced Iowa team with a new starting quarterback started with three wins, dropped a couple of tough losses to start the Big Ten season, and got their first conference win against Indiana.  Anyone else think it feels like 2001 in here?