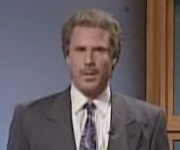 Welcome to Blogger Jeopardy. I'm your host, Will Ferrell's impression of Alex Trebek, and we have quite a contest in front of us. In third place, with negative $4,400, is Governor of Alaska and Vice Presidential candidate Sarah Palin! 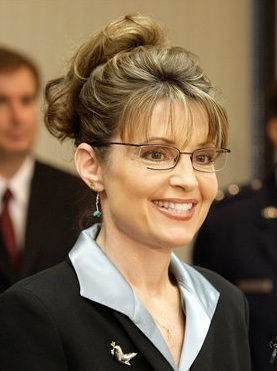 Thank you Will Ferrell Alex, and I'm just so happy to be here with Americans as we celebrate a great institution called learning and such as to exchange ideas and facts without the media filter and job creation is just not a scary thing under that umbrella as he rears his own head and how is that even possible heads don't even have rears or not places to rear themselves anyway and did you know Barack Obama is a terrorist?

Wonderful. In second place with negative $3,100, an old friend of ours who still has not taken off that oversized hat, Burt Reynolds! 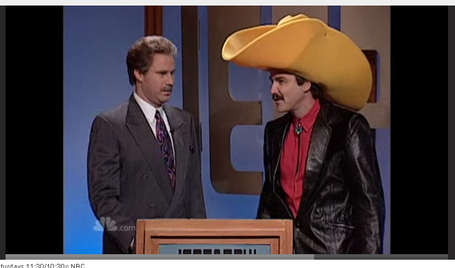 That's not my name.

No it is not. And finally, an even older friend of the program, with no dollars and a missing buzzer, all the way from Happy Valley, Penn State head football coach Joe Paterno!

MISTER PATERNO WILL BE FINE, THANK YOU

has requested that we call him Mr. Paterno.

Hey talking guy. Check it out. 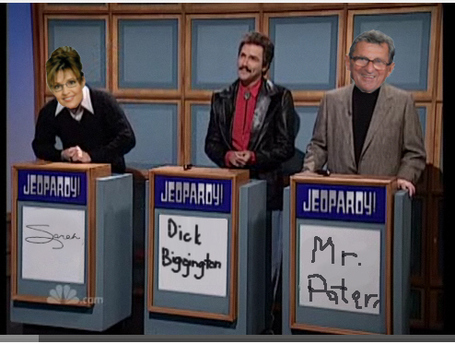 And it appears Turd Ferguson has changed his name once again to Dick Biggington.

It means I have a large penis.

No it does not.

We have quite the Double Jeopardy in front of us, so let's look at the topics. They are:

New Offensive Schemes In 2008, not many of those, Potpourri, Modern American Literature, which we will skip, Coaches, Food Is Yummy, and finally, Big Ten Teams in Minnesota. Governor Palin, you haven't come close to answering a question correctly or even coherently, but since rules dictate that the contestant in last place chooses the first category, I regret to inform the audience that the board is yours.

That is not a category.

MISTER SIXPACK WILL BE FINE THANK YOU

No! For crying out loud, let's start with New Offensive Schemes for $200. "This oft-maligned quarterbacks coach and his offensive approach that has rolled over opponents." Mr. Paterno, you may know this.

WHAT IS THE SINGLE WING

It's not your turn, and no.

That's how I made Trig and he came out extra retarded!

Yeah it is. They play football.

Colors for a thousand.

For the last time, football is incorrect! The correct response was, "what is Jay Paterno and the Spread HD?"

As much of a raging success that last question was, let's switch gears to Coaches for $200. And the answer is, "This icon was named the 'Big Ten's Sexiest Coach Feature' in 2007, beating out Ron Zook's muscles and Bill Lynch's 11-inch mansausage." Yes, Ms. Palin, you rang in first?

Well, I certainly can answer that question, Alex. You see, Alaska shares a narrow maritime border with Russia, and we can see them from our state if the skies are clear and we're on an uninhabited island and we're looking at their uninhabi

In what respect, Charlie? 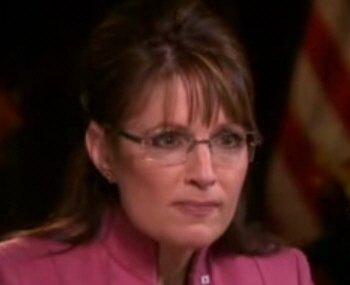 When did you change into a pink shirt? Yes, Mr. Paterno.

THANK YOU, THE ANSWER IS KIRK FERENTZ'S GAMS

What? Good lord, no. Mr. Biggington will not be ringing in, as he has wandered away from the stage once again. The correct response is, what is Joe Tiller's Mustache? Good heavens, even Terri Schiavo would dominate you people.

Sure. Fine. Whatever. I'm drinking either way.

I REQUEST THE AMERICAN LITERATURE FOR $600 PLEASE, THANK YOU

I cannot recommend that, but you've done enough damage in the easy categories anyway, so here we go. This Alice Walker book was adapted into a movie that earned Whoopi Goldberg her first and only Oscar. I will be stunned if anybody gets this. Yes, Burt?

NO. Come on, people. This is what LTP's dick looks like with his team at 5-0. Mr. Paterno?

I ONCE MADE WHOOPIE WITH A YOUNG LASS, PROBABLY NO OLDER THAN 16 WERE EITHER OF US. WHAT FUN WE HAD FROLICKING ALONG THE BANKS OF THE ALLEGHENY AND EXPLORING OUR YOUNG, NUBILE FRAMES WITH INVITING FINGERTIPS, MOUTHS, AND ANI. THE TWIST IS THAT AFTERWARDS SHE TOLD ME HER LAST NAME WAS GOLDBERG. THAT IS MY WHOOPIE GOLDBERG STORY

This nothing to do with

DO NOT INTERRUPT ME, YOU HEATHEN RAPSCALLION. LONG STORY SHORT, I HAD TO GO HOME AND TELL MY FATHER I HAD CONTRACTED THE DREADED JEWISH CHLAMYDIA. I COVETED MONEY FOR A DECADE AND SAW MY FORESKIN DECREASE EXPONENTIALLY

I'll just end this one now before we lose even more viewers and just say incorrect. The Color Purple, people? Anyone?

No! You want to take this one, Mrs. Palin?

For our world view?

Are you always this dense?

You know what? Forget it. Let's move on to Final Jeopardy now for the good of all humanity. You're all catastrophically in debt to Merv Griffin Enterprises after this episode, so we'll just forgive the debt of whoever comes halfway close to answering this question correctly: Who is the movie "Rudy" about?

Time is up, and here are our answers.

The absolute worst in our nation's history. And you wagered... White Power with a dollar sign. Wow. Mr., um, Biggington, your response?

I didn't write anything.

Say something, anything, about Rudy and you win. And your response? "I STRUGGLED TO KEEP MY TEAM INTERESTED IN 1973 WHEN WE BEAT A MIDDLING NCSU TEAM BY SIX TO KEEP OUR UNDEFEATED SEASON ALIVE. WE DESERVED TO LOSE THE GAME, WE DID. SO I FOUND A GOAT AND THAT IS WHERE THE FUN BEGAN." Okay, I'm not giving up on this. Did you kill it?

Was it named "Rudy"?

Do you understand that if you say the word "Rudy" you automatically win on account of your opponents are drooling retards?

SO RUDY THE GOAT STARTS

Aha! I knew it! JoePa wins! Get me the hell out of here! Good night, people!

WHERE DID EVERYBODY GO

THE GYMNASIUM HAS GONE DARK

AND SO HAS MY PROSTATE

Editor's note: Due to TLDNR constraints, we could not address the following answers from Mr. Bixel. Ironic, really, since the only reason we said we'd participate was the Hawkeye State question. Our contestants insisted we address these questions after the fact, so fine, whatever.

Who is Hawkeye State?

He is those who would question our freedom.

Okay, so JoePa just, uh, what's a nice way to put this? Uh, he just gave Governor Palin tickets to Syndrome of A Down. Let's say that.

Anyway. We also didn't get to these:

Who is Terrelle Pryor?

Who is Mark May?

Fifth month of the year. Gimme Colors for a million.

Who is Rich Rodriguez?

Best wishes to Bixel and TOGTM, and thanks for hosting this total trainwreck. There's A Game On Saturday? will run Friday afternoon. Run for your lives.